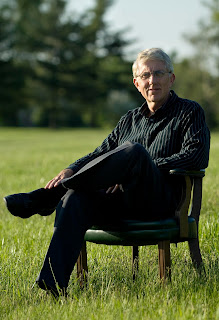 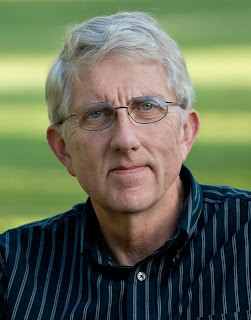 Here is a biographical sketch of myself that will tell you WAY more than you will likely need to know about my background and experience.

William Recktenwald served as President of the Faculty Senate at Southern Illinois University Carbondale 2011-2012. A senior lecturer and journalist-in-residence for the School of Journalism at the university, he joined the faculty in August 1999. He was elected senate president in April 2011.

Recktenwald teaches courses in News Writing and Reporting, Public Affairs Reporting, Feature Writing, Multi-Media Project and Investigative Reporting. He also works with the staff of the Daily Egyptian, an award-winning student-operated newspaper with a circulation of 20,000, and is faculty adviser to the student chapter of the National Association of Black Journalists.

Recktenwald is the regular teacher for Journalism 311, News Writing and Reporting. He has taught the course for 25 semesters and has watched enrollment increase from 18 to 36 (the maximum). Twice since he came to SIU he has been named the Outstanding Term Faculty Teacher in the College of Mass Communication and Media Arts.

In June 2006 he was a volunteer trainer for a journalism program in Uganda and Kenya, in 2002-2003 he worked with a team of SIU journalism professors and traveled to India, Sri Lanka and Nepal to conduct training programs for local journalists, and in the summer of 2002 the same team conducted workshops for journalists in Tanzania. The programs were all funded by the U.S. Department of State.

In March and again in July and August 2007 Recktenwald traveled to Uganda to teach as a volunteer at Makerere University and the Islamic University in Uganda, as well as to conduct workshops for news professionals in conjunction with the U.S. Embassy.

In 2008 Recktenwald was selected as a Fulbright Senior Specialist and served in Uganda that year. In 2008 he was inducted in to the Chicago Journalism Hall of Fame.

While vacationing in Sri Lanka in 2004, Recktenwald was caught in the waters of the deadly tsunami. He wrote about his experience for the Chicago Tribune (read the first person account) and returned to Sri Lanka in March 2005 to file additional stories for the St. Louis Post-Dispatch about the recovery efforts. During the March visit he gathered material for a report used by National Public Radio and aired by WSIU and Chicago Public Radio.

He was invited by the U.S. Department of State to conduct a series of training sessions for journalists in Maldives and Sri Lanka as well as a series of public lectures about American journalism during January 2006 as part of the Distinguished Speaker Program.

At SIU he is a University Housing faculty associate and a member of the International Friends Club. He oversees an innovative program for Kellogg Hall a student residence for those studying in the College of Mass Communication and Media Arts. In this position he coordinates activities to enhance the learning experience for students. In 2007 Recktenwald was selected to receive the University’s Outstanding RSO Adviser Award for his work with the NABJ.

Recktenwald is a co-author of The Illinois Story - The State’s History and Competitive Edge Today, published in 2002 by the Illinois Publishing Group. The 368-page, hardcover book is sponsored by the state of Illinois as a tool for economic promotion. He was the lead instructor for The Shawnee Project a student produced hard cover coffee table type book The Shawnee Forest : Illinois' Hidden Gem.

When Recktenwald retired from the Chicago Tribune he was the deputy Chicago bureau chief and a reporter. There he helped to develop the daily news report for the city and deploy a staff of 50 reporters who work from the Tribune Tower on metropolitan news.

Recktenwald also served as a mentor and supervisor for student interns who worked at the Tribune.

He joined the newspaper staff in March 1978 and worked on many award-winning projects. Recktenwald was a major contributor to the Tribune’s "Killing Our Children" effort in 1993. The series, a Pulitzer Prize finalist, documented the murder of every one of the 65 children slain in the Chicago area that year.

In 1984 he wrote a series of reports about street gangs in Chicago, detailing how they have become increasingly sophisticated and violent. The stories were one of three finalists for the Pulitzer Prize for Public Service. More importantly, in the year following the series the number of youth homicides in Chicago dropped by 40 percent.

The reports found that these people had become hopelessly entrapped in circumstances beyond their control and beyond the control of government. The stories documented that the nation had socially and politically accepted these people as residents in the basement of the American dream.

His first major assignment at the Tribune was an in-depth examination of how the nation treats its elderly. The 14-part series Growing Old in the Nation of the Young was a finalist for a Pulitzer Prize.

In 1983 Recktenwald received the William H. Jones Investigative Journalism Award for stories about vote fraud that resulted in the convictions of several political workers.

In 1978 he went undercover, working as a guard in the Pontiac State Prison, where a riot three months earlier had led to the deaths of three guards. His chilling reports on prison conditions led to a restructuring of the state prison system and earned Recktenwald the Edward Scott Beck Award, the Chicago Tribune’s highest editorial award. While at the newspaper he contributed to stories that received nominations for the Pulitzer Prize nine times. Four of those were finalists.

Much of Recktenwald’s reporting at the Tribune focused on crime, corruption and violence. He reported extensively on homicide trends, firearm violence, shortcomings in government services to poor neighborhoods, the societal cost of violence and changes in policing methods.

But Recktenwald also wrote about more upbeat subjects. He has done reports for the Chicago Tribune Magazine about a day in the life of the veterinary hospital at the University of Illinois, the Experimental Aircraft Association and Chicago’s effort to win America’s Cup. He covered the Chicago to Mackinac sailboat race for 12 years.

His final undertaking was a Tempo series on the highways and byways of Illinois that introduced Chicago residents to unique people who live across the state.

Before joining the newspaper, Recktenwald worked for the Better Government Association for 12 years, serving as the civic group’s chief investigator for seven of those years.

While at the BGA, Recktenwald directed the 1978 Mirage tavern investigation. Working with the Chicago Sun-Times, the group purchased and ran a tavern for four months to document corruption. (read the entire Mirage series it is here in five PDF links: #1 , #2 , #3 , #4 , #5 )

In 1968, working with Donald Barlett of the Chicago Daily News, Recktenwald’s efforts to expose vote fraud resulted in the first indictments for violating the Federal Voters Rights Act.
In 1972, he directed the BGA effort in tandem with the Chicago Tribune to expose massive vote fraud in Chicago. The project was awarded a Pulitzer Prize.

With Chicago Tribune reporter William Jones in 1970, Recktenwald worked for six Chicago ambulance companies to expose inhumane treatment, graft and bribery. The series on their experiences was awarded a Pulitzer Prize for local reporting and resulted in criminal indictments of numerous ambulance company officials and Chicago police officers, as well as a total restructuring of the Chicago emergency medical services.

During 1975 and 1976, while on leave from the BGA, Recktenwald served as the chief investigator for the subcommittee on Long Term Care of the U.S. Senate Special Committee on Aging, which probed waste and fraud in the Medicaid and Medicare systems.

From 1962 until 1966 he served as a criminal investigator for the Office of the Cook County (Illinois) States Attorney.

Recktenwald as a director of the River to River Trail Society, a group that maintains a 160 mile hiking trail through the Shawnee National Forest across the southern tip of Illinois. He is the Hardin County disaster worker for the American Red Cross.
Recktenwald is a power airplane and glider pilot. For years he raced a sailboat on Lake Michigan. He now resides on a 110-acre farm in the Shawnee National Forest.

Here Recktenwald is hard at work as Faculty Senate President! 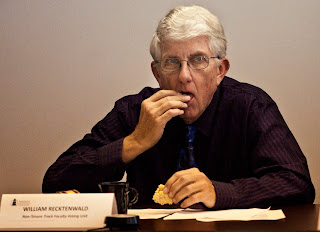